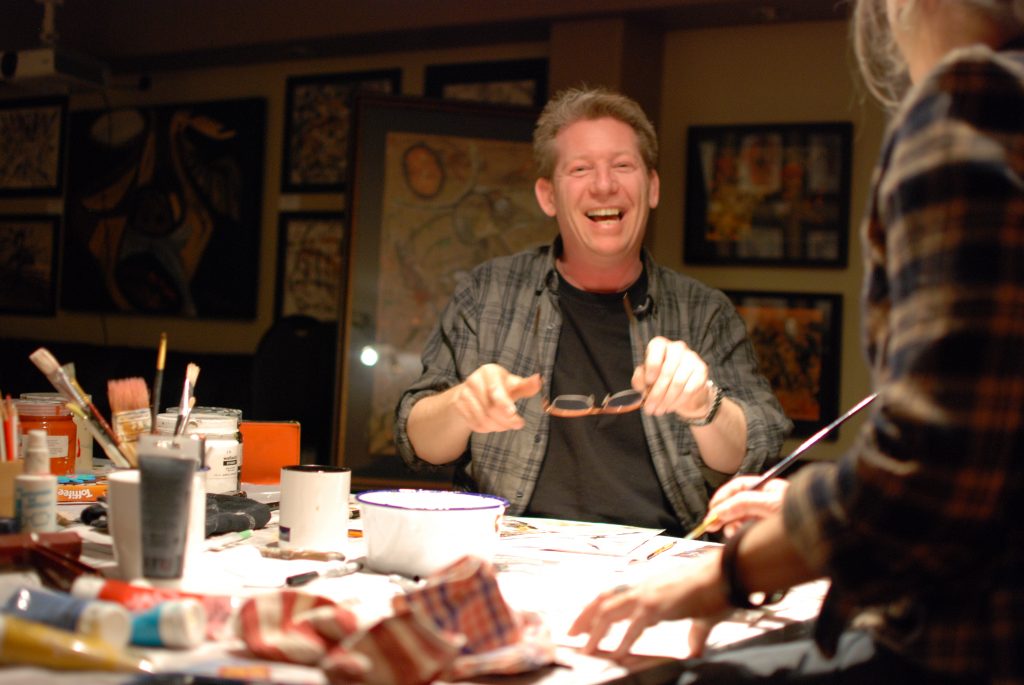 Marco Henrie was born in Hull (now Gatineau) in 1971 on the edge of the city and Gatineau Park. He still lives there. His father practiced car mechanics as if it were an art, his mother was passionate about music and came from a family very much open to artistic creation. Very early Marco leaves school and learns the job of mechanic. But at the same time, he strongly feels the need to explore a completely different world: he first engages in community television, then tries out theater and photography. Then he will compose songs, guitar in hand. Finally he discovers drawing and especially abstract painting: it is a revelation, love at first sight.
Although he loves music immensely and enjoys success with his compositions, he prefers to the stage the solitude and intimacy of the painter’s studio.

Marco dives with passion in the world of images, color, brushes and spatulas. Far from abandoning music, he integrates it into his process of creation: it brings out in him emotions and images of a forgotten or repressed past mingled with those of the present, of the life that goes on. In addition, he devotes a lot of time to reading about the great painters and their works: Riopelle, Picasso, Miro, Dali and Pollock inspire him particularly and stimulate his own research. While pursuing his personal quest. Each canvas becomes for this self-taught an exhilarating journey: a plunge into the void and into the unknown, hours spent out of time, alone in front of the web where takes form, often in the middle of the night, a surprising story and which ends by a painting that is both recognition and distancing of something of itself. And each painting is the prelude to a new journey, each painting calls for another.

The death of his parents marks a turning point for the painter: he feels an immense need for creation, and wishes to devote himself more and more to his art. His thirst for authenticity opens new horizons. His research intensifies. The paintings become larger and more numerous, new techniques and new tools are explored, the gesture is released, opens, the movements are more extensive, it almost looks like dance. The artist and his work breathe freely and deeply.

For Marco, to paint is an insatiable search, an inexpressible happiness of creation, a challenge to defy death which is so close, a new step in the search for a painting increasingly more astonishing than the previous, more original and likely to reach a large audience. Marco, convinced he is offering something different to the art world, is ambitious. His many works (more than 600 paintings and drawings), wants other to take advantage of his work therefore wants to see them displayed, looked at and appreciated all around the world. In 2008, in Ottawa, first exhibition in a gallery: the Calligrammes Gallery: he can see on the walls his canvases alongside the paintings of the great masters whom he admires both Jean-Paul Riopelle, Salvador Dalì, Joan Miro and Pablo Picasso. It’s a real adrenaline rush: living with your art becomes a big dream! Soon he devoted himself to painting full time. And since the exhibitions are multiplying.

In 2017 Marco goes to New York City to present his work to galleries and signed a representation contract with the Agora Gallery in the Chelsea district in Manhattan , New York City.

In July 2018 for the first time, Marco is taking part of a collective exhibition outside of Canada « The Figure and Unknown Places » at Agora Gallery, New York..